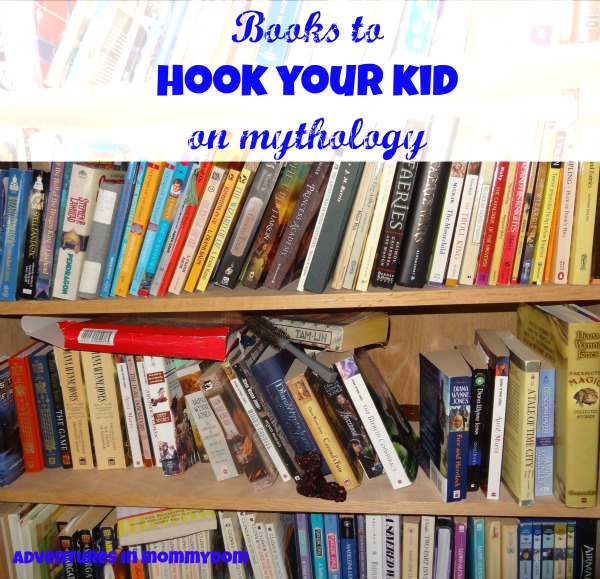 I’m a big fan of mythology.  When I was in high school my English teacher deferred to me as more knowledgeable.  Which threw me a little, but I guess it wasn’t her area of expertise, or she was trying to lift my self esteem.  Then in college I wrote one of my term papers on Hathor and the Egyptian pantheon.

When I told Jeff I was going to write about this, he looked at me and said, “Is that one of our goals now?”  I don’t think he appreciated the “Well, duh” look I gave him.  It probably was not the best way to handle your husband.  So, without further ado 10 books to hook your kids on mythology:

This is the obvious one, but if you want to hook your kids on Greek mythology and get them started on this life long obsession I mean fascination, this is a great place to start: Percy Jackson and the Olympians Hardcover Boxed Set (Percy Jackson & the Olympians)

(I have the hardbacks AND a copy on my Nook)

This is the second Percy Jackson series, but I put it in a separate category because it deals with the Roman side of mythology.  Besides, it gives me another reason to talk about one of my favorite authors, this series is not complete yet: The Lost Hero

, The Son of Neptune

, The Mark of Athena

, The House of Hades

Welcome to the insanity of Egyptian mythology.  To me, Egyptian mythology is kind of like that crazy uncle you see at family reunions, you always get a kick out of them.  If you want a TV show to hook your kid on, Stargate SG-1 (first season was on Showtime, so you have to be careful with that, besides 1st season is not all that great, but after that….).  I’ve got most of this one on Nook, but the first one or two I have in hardback: The Kane Chronicles Hardcover Boxed Set

(in case you can’t tell, I’m a sucker for boxed sets).

This is a fun introduction to Norse mythology.  David comes home to his relatives for holidays and when he is mad at them accidentally releases Luke.  The rest of the week is spent with Luke’s strange relatives coming to try and catch Luke.  I love the subtle references to Norse mythology (which I am the least familiar with of European mythos).

As you will very shortly figure out I’m a big fan of Dianna Wynne Jones and own almost every single one of her books.  They’re hard to find in stores, so I scour Half Price Books for them and this is one of her lesser works, but it’s a great introduction to the stories behind the constellations and the names of our stars.

This is the closest to straight mythology that I’ll get.  It’s an adaptation of a Norse legend, and it’s hilarious.  Especially if you listen to the audio book, the voices are wonderful.

Now, I’ve drawn a blank, so I’m going to traipse upstairs and peruse my shelves for further ideas.

Okay, now I’ve wandered the shelves, found a few dozen books I want to reread, and gotten distracted by other topics.

The Chronicles of Prydain Boxed Set

This gets you into British mythology, specifically Welsh (it’s been a few years since I read the series, so I may be misremembering).  If you’re looking for a great adventures, then this series is for you, and it covers many of the big themes in this mythos and terms.  I have yet to find a great book that covers British mythology beyond these books and other novelizations, any of my British readers know of some for Welsh/Irish/Scot mythology? (yes I know those are each very separate and distinct)

and Taliesin (The Pendragon Cycle, Book 1)

These are both books about the Arthurian legends.  Merlin Conspiracy is by Dianna Wynne Jones and is for middle school, it turns the whole idea and takes a twist.  Taliesin is book 1 in a 6 book series, and it draws in some Greek mythology (Atlantis and a few other things) and is for high school age for length and some of the content.  But, if you want your kids hooked on the Arthurian legends, this is the place to start.  Okay, it’s one of them, you could also show them The Sword in the Stone, but that’s a movie……..

Islands in the Sky (Voyage of the Basset, No. 1)

This is the start of a book series aimed at 4th grade reading level, I’d approximate.  It has a hodge podge of mythologies, mostly Greek, but there’s a few others thrown in.  Sadly, they didn’t finish off this series, so there’s only a few books in it, but I very much enjoyed what we have so far.

I was sure Jane Yolen was going to have something for this category, but it looks like she’s focused on retellings of fairy tales, which is completely another post for a different day.  That’s another 2 shelves of my bookshelf.  And while looking I found about 5 more books I want to buy.  My poor wallet.

A fun stand alone, because every now and then you don’t want all of the books you read to be series.  The main character is homeschooled (score), and invents games for her cousins to play.  They go all over the “house” (which you find out more about its magical properties) and during that time interact with different mythologies (primarily European).

Well, that’s around 10, as long as you count each series as one book……….  I don’t really know of any novel length books for the American or Asian mythos.  I know of several picture books, but that wasn’t the focus for this post.  If you know of some add them in the links and maybe I’ll write a follow on post to this one.

For the next 10 Weeks I will be joining with many other fabulous ladies to create 10 in 10, 10 different lists and ideas for the next 10 weeks.  I am really looking forward to some of these topics to see what everyone else comes up with.  Come join us with your own interpretation of the 10 in 10.  Also hooking up with Many Little Blessings.