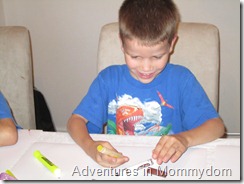 I was quite amused to find out the state song for Connecticut (Does anyone else think in their mind as they spell that state: Connect I cut?  Or is that just me?) is Yankee Doodle.  I rather like that song and it’s one of the few nursery rhyme archetypes we have in America (I have all sorts of amusing theories on the things we’ve created in America, that I might expound on someday). 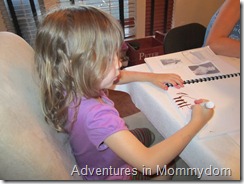 But, getting back to what I was talking about.  So, we read the very cute story up above which has multiple extra verses written by Mary Ann Hoberman that do a great job with rhyming and letting my kids work on predicting the rhyme, which they need work on.  And lets the older kids work on creating their own rhymes. 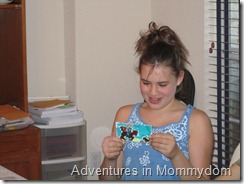 So, after listening to the story they all got an index card, and set to work creating their own verse to Yankee Doodle.  I love the illustration Oldest E came up with (at some point I’ll have to come up with nicknames for the families joining us in these studies).  I won’t be the least bit surprised if she becomes an illustrator someday. 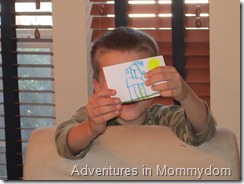 There’s Superman sharing his illustration.  After drawing they each  took turns sharing their rhymes and illustrations with everyone. 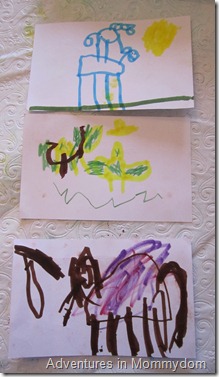 Batman: Yankee Doodle stuck a feather in his cap and called it Pteranadon

Princess: Yankee Doodle went to town riding on a pony, stuck a feather in his cap and called it dog.

I love how much their drawings  and rhymes indicate their personality.  Don’t you just love their illustrations?

Some other Yankee Doodle activities, I really wanted to play the game:

Adventures in Mommydom (part of our nursery rhyme book)

How Stuff works (a game)