To Kill a Mockingbird book club

To Kill a Mockingbird synopsis

To Kill a Mockingbird follows Scout Finch as she comes of age watching her father fight to free a black man unjustly accused of raping a white woman.

That’s the short summary, there’s a whole lot more to this book, and it’s easy to see why it’s captivated so many people and got so many people talking about it, and why you so often see To Kill a Mockingbird book clubs.

The Big To Kill a Mockingbird controversy

To Kill a Mockingbird was all over the news a few years ago when the author’s second book was released a few years after her death. Everyone I knew who was a huge fan of the book all were talking for weeks before it came out, and then it came out. They all hated it. All of them. “It betrayed my childhood!” “It changed Atticus. How could they do that?”

Go Set a Watchman is set two decades after her first book and grown up Scout comes back to Maycomb to visit her father.

Sounds sweet right, but in the book there were all sorts of revelations about Atticus that had my friends upset, he was revealed to not be this shining pillar standing up for what was right, but just as flawed as anyone else, and also just as racist as all his neighbors.

I haven’t read the book, this is what I got from all of my friends who read it. After hearing their complaints I chose not to read the book, because I was pretty sure it would just get me mad.

Did you read it? What did you think?

To Kill a Mockingbird book club

Also, there’s a lot to discuss in this book. 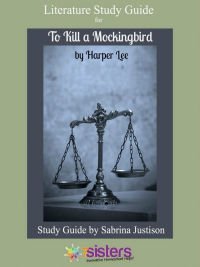 The 7 Sisters dicussion guide focuses on setting and comparisons. So we talked through that every 40 pages, but we also discussed point of view and how our opinions are shaped by where we grew up and what we perceive as normal.

We looked at the setting in Maycomb as ridiculous. We would never treat someone that way. I asked, but would our opinion be different if that’s the way we grew up?

But, back to my statement of “low level racism in Huckleberry Finn* versus the outright racism of To Kill a Mockingbird.”

I can hear you now, “But Ticia, in Huckleberry Finn there is outright slavery, how is that not outright racism?”

It’s in the point of view character. Huck Finn seems nice. He feels like he’s friends with Jim, but he still feels superior to Jim. It’s insidious.

Okay, it’s not really related at all, but I love that scene, and as soon as I typed the word insidious I thought of it.

But, you sympathize with Huck, and you don’t see his attitude. He’s fun and likable.

The people of Maycomb, you see their racism. It’s in the laws and their willingness to kill a man without a trial, and even kill Atticus because he got in their way.

That’s ugly, it disgusts us.

My kids could see the problem because it was black and white. They saw the miscarriage of justice.

It was harder to see in Huckleberry Finn.

As we talked about the book, we also talked about how the United States got from racism to segregation. We talked about what could have changed after the Civil War to not have the results we got, and if it’s even possible (I’m not sure it is, but I think Reconstruction made it worse).

Afterwards we started talking about The Hate U Give, which had recently come out and how that could be an interesting third book to read with these two, but I wasn’t sure if the kids were quite mentally ready for it yet.

If you are able to, I highly suggest reading these two books together.

*I just realized I haven’t written my post about that book club yet, and I need to get that done.

Okay, some of these To Kill a Mockingbird snacks are somewhat based off of names, and slightly punnish. I also realized as I was puttnig this post together, I either forgot to make a snack, or didn’t take a picture of one, because there’s no picture. Also, I couldn’t fit all of the snacks we had into this collage.

Some Inspiration I found for To Kill a Mockingbird snacks

Whenever I’m planning one of these movie nights, I always do a search for different ideas people have had, this is one of the more popular books, so I had lots of possible inspirations this time.

While we read To Kill a Mockingbird in 8th grade, on my Book List (you’ve subscribed to get the coupon for free printable bookmarks, right?) it’s listed as 6th grade.