Sooooo…….  I went to the library to find books on South Carolina and came up with 6.  Three about the same thing.  One which is checked out presumed missing (but was an awesome book), and another which doesn’t really lead itself to any sort of activity.

Which leads me to begging, if you have any suggestions for South Carolina, something that stands out to you please let me know.  PLEASE.

Okay, on to our project.  We read about the HL Hunley.  It’s the first ever submarine, and it sank and for years it was a mystery where did it sink, why did it sink, what happened?  And then come the turn of the century (isn’t it funny to say that and not mean 1900s?) they found it!

But how to lift it?  How can we explore its mysteries?

Shipwreck Search {affiliate link} details all about the search for the Hunley and how we finally got it to the surface.  We got details of how they first searched for it right after it went missing.  Then details of the attempts through the ages, until finally it was found. 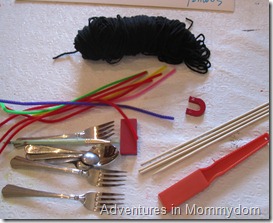 So, I gave each group of kids a bowl filled up with mud and water, and buried in it were the two cars pictured above.  I also buried miscellaneous things, rocks, bolts, other stuff.

Instructions: Using the materials pictured on the right, find the “Hunley” and discover how to get it out of the bowl without touching the car or the water. 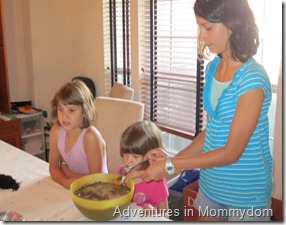 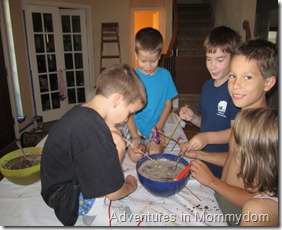 Then the race was on.  The girls started by poking around in the water with the bamboo rods, until they found the car.  Then they used two forks to raise the “Hunley.”

The boys probably had too many cooks in the pot.  They all happily got to poking around and did find the car very quickly, but they took about a minute longer.

This was a huge hit with the boys who hid their “Hunley” several more times before finally being done with it.  After the other kids left my boys then spent several more minutes (read half an hour) finding everything in it they could.