So with the memorial service and all we didn’t really do super a lot last week.  I made attempts, but there were lots of interruptions, and I wasn’t really up for super much.  So, here’s one of two educational activities that I did last week.  Okay, I did a little more, but this is one of two that I actually am going to bother to write a post about.

Resources for a Pecos Bill lesson 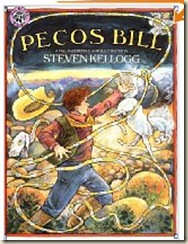 First, we read Pecos Bill by Steven Kellog, and I both liked and disliked it.  On the one hand, it had some great details that I didn’t remember from other stories, but on the other hand, it ends with a happy ending.  In the traditional version, he doesn’t get Sluefoot Sue back……  However, my kids loved this book.
After reading the book we watched the movie (I’d give you a link to where you can legally buy it, but I’m unable to find that):

After watching that I had the kids tell me what was different from the movie and the book.  Mainly they were disappointed that in the movie he didn’t make a lasso out of a snake.  Then I had Superman retell the story for me.  I’m going to start working on them retelling the story with as little prompting as possible.  My plan is for each kid to retell one story a week.

He fell out of the horsey. He got ______ by coyotes. Then he got wrapped up by a rattlesnake. Then he got all the bad stuff out of the rattlesnake. Then he was attacked by a big monster, and he wrestled it. And then he had a snake for his lasso and then he had a monster for his horsey.
He found a horse named Bolt. He ride him. And then he died.
He met a girl. I don’t know her name. The girl wanted to love him. He loved the girl. She wanted to ride his horsey he was riding. Her bounced a lot. Too many. She bounced to the moon. She bounced a million how she stayed.
Bill tried to catch her too. He didn’t catch her cause her went to the moon.

And that is Pecos Bill as retold by Superman, pictured above, he got most of the details right.  It’s really rather amusing.

A not so good idea for the Pecos Bill activity

We made lassoes out of some nylon rope I had, which I have no clue where it came from.  Huh, so you do spell the plural with an “e.”  In retrospect, this may not have been the best of plans…..  Because this is what the boys eventually did.  And then they spent the next several days going around lassoing each other and anything they could try to get caught.

More Texas ideas I had planned

Now, the other book I had planned to read to them is “Hector’s First Flight,” which is apparently so rare that Amazon hasn’t heard of it, or I’m totally not remembering the name of the book, but it has heard of the sequel.   Hmmm, it doesn’t even have the book listed with the other books by the author, so maybe it’s just not in print anymore.

Back to the point.  This book is about the “Mexican Free-Tailed Bat,” which is one of the symbols of Texas, along with the armadillo, longhorn, monarch butterfly, and a whole slew of others.  I’m kind of wondering if every state creates this many symbols.  Well, I never found my copy of the book.  I’m beginning to think there’s a book eating monster in my house that eats the books just as I want to use them.  I distinctly remember seeing it upstairs on a table a week before I planned to use it and thinking I should grab it, but I didn’t for some reason.

Since I didn’t have the book, instead I printed off all of the different symbols of Texas and let them happily color the pictures.  If you’d like to use the same images I did go here.  It’s a link to the Texas Parks and Wildlife Department, and it has some great pictures to color.  I shrunk them down so I could use a little bit of everybody’s pictures for our lapbook.

Photo by Mahir Uysal on Unsplash