So, since North Carolina is the state of flight, we tried out paper airplanes, I went to paper airplane design  to find all of our different ideas and then we had fun……. 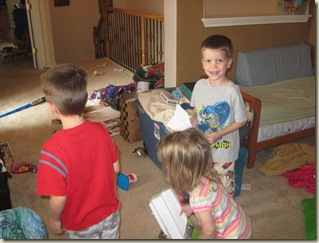 Only, it didn’t quite go as planned.  I carefully chose planes they said would fly very far.  I had them all makes guesses, and then here’s what happened with our planes. 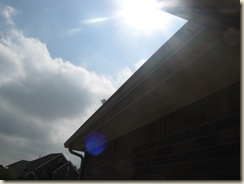 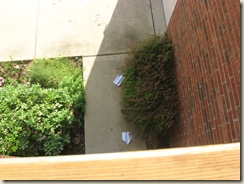 In case you can’t tell, the picture on the left is my plane up on the roof.  As far as I know it’s still there.  The kids planes all went straight down.  You can kind of see one in the bushes. 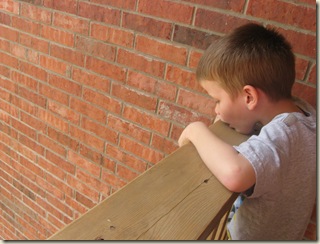 Batman checking out what happened.  This was not the amazing experiment I was hoping for.  Undaunted we tried again, this time not from our balcony, which I was so sure would give that extra UMPH to the experiment, and make me the SUPER COOL MOM who let her kids throw paper airplanes off the balcony. 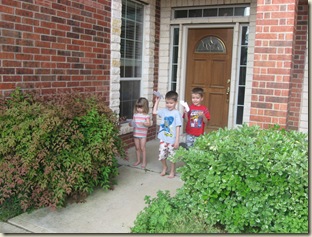 So, we tried again from the front porch.  Again, the planes didn’t go so far, like maybe to the end of that little walkway, and all three of the different styles went about the same distance.  Which is almost nowhere.

And here’s the science behind it.   Really, this didn’t go as well as I was hoping for.  I told Jeff when he left for work that the kids were going to be talking about it when he came home from work.  We went to lunch with him and they barely remembered doing it.  With a little prodding they told him about it, instead they told him all about how they drew and that they got to paint, and who knows what else, but airplanes, not a whit.

Oh well, maybe with our study of Asia and China we’ll blow something up next week, that’ll be interesting, right?  They’ll remember it enough to talk about it to Jeff that night…..  That’s my theory.  I mean if the weather had cooperated we could have flown kites and compared those to our planes.

Sigh, hopefully soon we’ll be off this unsuccessful science streak it feels like we’re in.  So, I know you’ve told me before how your experiments didn’t go well either, but this one really felt disappointing.  We didn’t even get to recover by eating ice cream.

So link up, encourage me with your successes or entertaining stories.  And then after you’ve linked up go over and give yourself another entry for my CSN giveaway.