History/Geography stuff is probably going to slow down because our geography coop will probably be on hiatus until one of the families gets back from their annual trip to Latvia.  Good news for me, more time to figure out what I want to do and preview books.
Bad news for me, I really enjoy those sessions…….  Sigh.

I might keep doing some projects with my kids and then redo them with the geography group again.  Hence this Maryland project.  Also, I wanted to try out a theory on painting.
So, while we work on this project we listened to the Adventures in Odyssey It’s Another Fine Day episode about “The Star Spangled Banner,” which is a really good one and gets you to thinking about stuff.  If you don’t have that available, “By Dawn’s Early Light” also covers the history behind our anthem, but I thought listening to this would be a fun change of pace. 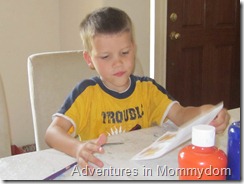 I gave each of the kids a half sheet of paper.  Then I gave them each 2 ships and a fort to glue on.  They happily did and spent a merry few minutes explaining who was good guys and who was bad guys………. 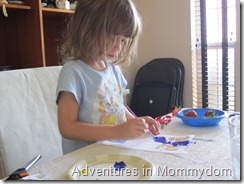 Then they painted their ocean blue.  I was rather insistent on this, and didn’t give them any other paint except blue.  I’m so mean……

After they’d painted their ocean I gave them a stiff brush and a little, red, yellow and orange.  I showed them how to dip their brush in the paint and then flick it at the paper with their finger.  Which Princess was not happy about because it got her fingers messy.
Then after awhile they just wanted to paint whatever.  So, the boys painted numerous “John Avery Whittacker” and Princess just had fun. 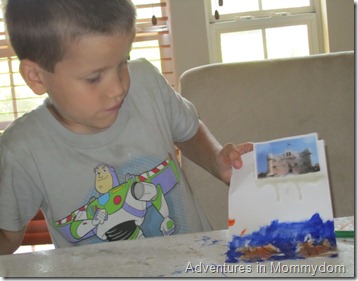 Superman’s final project.  As you can see, he used a lot of glue for the fort.  And there were not a lot of explosions going on. 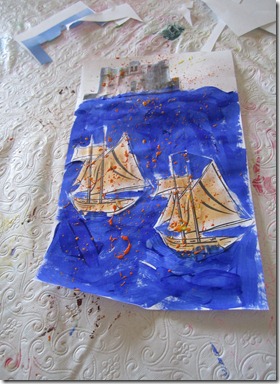 This is more what I thought it’d look like.  Still, not quite the dramatic explosions and stuff I was hoping for.  Maybe if we had watercolors and could have blown them with our mouths……

If you want the ship and fort print outs it’s just a quick clip art search from Microsoft, but to save you the time:

Edited to add more pictures from our geography group: 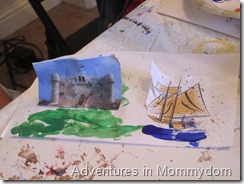 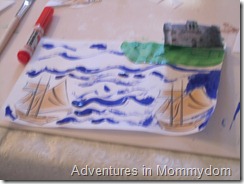 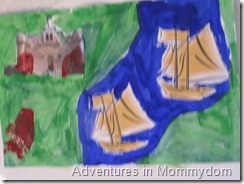 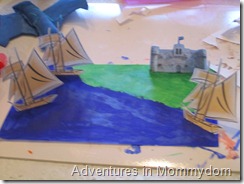 Don’t you just love the variety?