June was busy, the individual days weren’t that busy, but it was busy in that we weren’t home, so a lot of the stuff I usually get done didn’t happen. That being said, June was an awesome month for us.

(there’s going to be affiliate links in here)

We started off June with a bang and we drove off to New Mexico early in the morning to go help Native Vision for Christ group.

We spent the week organizing their new church building, making Christmas bags for the Navajo kids in the schools, and generally pretty busy.

We had another ladies night, which is always super popular with the Navajo women who don’t always get pampered like that. I spent the day making signs for the event (I was recovering from the worst migraine ever).

Technically we saw Henry V for the first time in May, but I included this in here, you’ll see it pop up again for the next week…..

Oh, and that little bitty picture with the reddish arrow is a barbecue place called “Serious Texas Barbecue.” The name made me laugh.

The Winnebago you see is the shower stalls for the church on the reservation, we were actually in town this year, so I took that picture more for memories. I was telling the new people how lucky they had it because we had actual REAL toilets.

I’ve got an extended post on family mission trips if you want to know more.

This was our recovery week, or so went the theory. I had this plan to not schedule a lot, but then Princess and one of her two best friends HAD TO SEE EACH OTHER, and there were appointments, and other stuff, and suddenly my calm week wasn’t so calm.

It probably also didn’t help I insisted on going to see Henry V TWICE, the Saturday night we got back from the mission trip, and then again Thursday night before we left.

What, it was an amazing production. 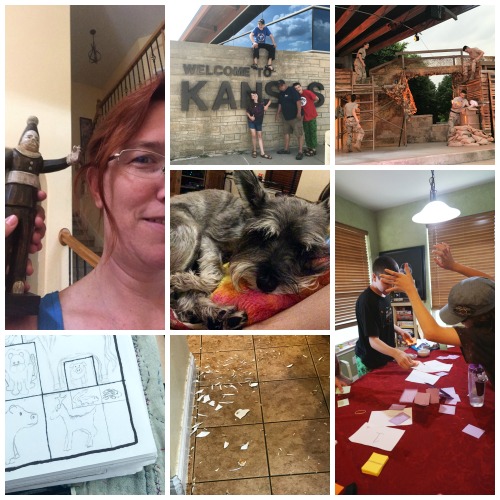 What did we actually do?

Superman brought home this super creepy Santa doll, and spent the week hiding it all over the house.

Mac, the dog, spent a lot of time cuddled up on top of us.

We played the Creation Rummy game, and my new variation, which I have no clue how to share it because it’s a speed game. I’d have to grab extra players so I could just film the whole thing. Oh wait! I have a tripod, hat tip to MaryAnne from Mama Smiles for recommending that (or a similar one). Okay, expect a very chaotic video and post on that once I print up some new copies. I gave all the ones I’d printed up to the Navajo church for their children’s church, as well as the Books of the Bible game.

I started working on a Noah’s ark game (see our Noah’s ark lessons), and now need to color it.

We managed to break a plate in a way I’m still not particularly clear how we did it, and of course that means I’m going to be finding a shattered plate for the next few months in my house.

Then we set off to Iowa, which I only got one picture at a state line, sigh. 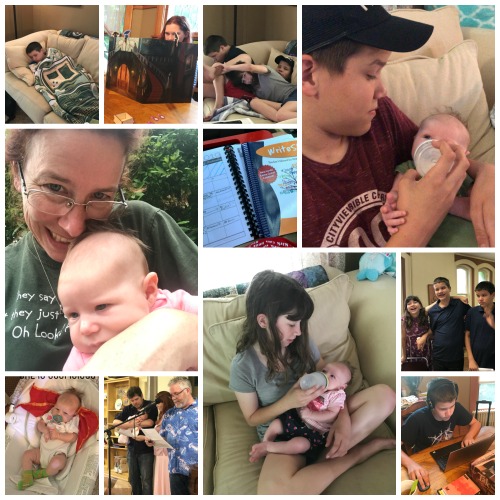 The last two weeks kind of run together and the pictures all look rather similar. Lots of holding the new baby, my kids playing on their computers as the boys desperately worked to finish their math, they got behind. I’ve got a full review of Teaching Textbooks in a few weeks.

As we drove up I got a large amount of our schoolwork planned out, and a general idea of the writing assignments from WriteShop. They’ve got some interesting assignments.

As is usual when we go up to Tara and Josh’s house, we played a lot of games. We played Mysterium (Tara’s game, and here’s my review), Oregon Trail (our game, my review), Last Night on Earth (Josh’s game, and I opted out, I don’t do zombies), and an epic 2 day game of Shadows of Brimstone (I still have no review of this game, which I should for how often it comes up).

The kids all learned how to change a diaper, with lots of cries of “this is so gross,” feed a bottle, and soothe a crying baby. My Instagram feed was filled with the new baby cousin for the entire two weeks. Here are links to my specific favorite pictures from the week (I don’t want to embed ALL of them): Batman cuddling baby cousin (he was constantly asking to hold the baby, he’s going to be a great Dad), Batman soothing baby cousin and helping the baby kick everyone, Batman changing the diaper, my sketch of a Princess picture holding cousin in an outfit she made

I somehow never put a picture up of Superman by himself with the baby.