There have been a lot of posts flying around about egg experiments lately, or at least I’ve noted a few:
Children Grow, Children Explore, Children Learn did an egg experiment this fall when they learned about E.

Joyful Learner (blog is now deleted) did an experiment with eggs floating (which is what I did).
I could have sworn I’d noticed a bunch more, but apparently I didn’t actually clip them to Evernote like I thought I did.  Or I tagged them with some strange mystery tag I don’t remember.
Our supplies: eggs (both raw and hard-boiled), water, measuring cups, and salt (a lot of salt).

Hypothesis: that if we add enough salt to the water the eggs will float.  We think it will take 8 spoonfuls for the egg to float.  Of course at first their hypothesis was that the eggs would change color in the water. 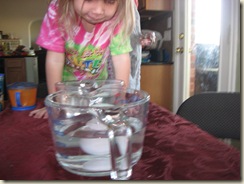 We started off slowly adding a spoonful at a time, or I should say the boys were all set to dump in the whole container of salt, which they kept calling sugar.  Then they would taste it say “It tastes like salt, I like this sugar.” 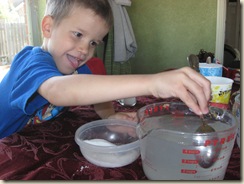 By the time the eggs would finally float the water was pretty cloudy.  Hence, why you’re not getting any pictures of the floating eggs.  You couldn’t really see them super well.
But, we discovered it took 12 spoonfuls of salt (admittedly most of those spoonfuls were rather small) for both of the eggs to float.  I was thinking the hard-boiled egg would take less, but it didn’t, so that surprised me. 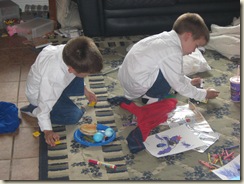 Now we get to where the kids took over the experiment.  In the Reading Rainbow Superman checked out from the library they made cars and buckled the eggs into them to see if they could keep the egg safe.  So, the boys happily started making their very own cars to do this.

Now, if that had been a less controlled crash that egg would have splattered, but you notice how very carefully he crashed his car into the sofa. 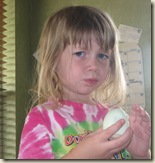 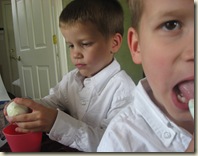 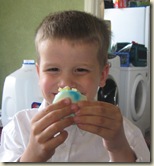 After all of this, they had to try a hard-boiled egg.  It was not wildly popular, and I then got requests/demands for some scrambled eggs, which is more what they’re used to. 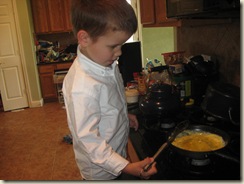 So, Superman quite happily helped me scramble some eggs.  And just for my memory, in the pictures above it is Batman in the middle picture shelling the egg, and Superman on the right picture happily “making his egg big.”

So, what did you guys do this week?  Did anyone else do egg experiments?  I know it’s the week after Easter, but hey I just wasn’t organized.  I seem to every holiday do a lot of the holiday related stuff after the holiday.  Oh well, it’s working for us.