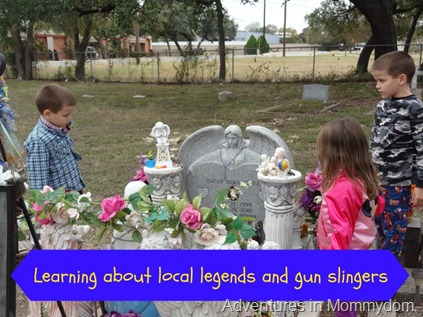 After we learned about the Chisholm Trail, I decided it would be fun to learn about some of the local Gun Fighters of the Old West.

We have a couple of local legends, the most prominent is Sam Bass.  He’s got a road named after him, a park, a theater.  So, I figured it was time we found out who this gun fighter was.

We hoofed it over to one of our local Taco Bells that had a nice long article about Sam Bass.  I’d been eyeing this article for a couple of years now every time we went in, and finally it was the time to talk with them about it.

Sam Bass was a rancher who didn’t do well, so he headed North and robbed a few banks in Montana, and some trains.  Finally he came home, at the ripe old age of 20 something, old man ya know, ancient.

He went into a general store (I’m telling this from memory), and attempted to hold it up with his gang.  While there an off duty Ranger came in and pulled his gun, shooting one of the robbers, but not killing him.

A running gun fight ensued with the Ranger becoming injured and the local sherriff, AW Grimes (who also has a street named for him) getting involved and finally fatally shooting the outlaw, but was himself also fatally shot.

We found out from the information there both were buried in the same graveyard, so we headed off to find their graves and obtain more information, and find a few more historical markers along the way.  Batman was intensely interested in the Slave Graveyard also in there, so we added that to our visit.

After wandering around for a while we found his grave in a far corner of the graveyard.  There was a big memorial for him, and for one of his mates who died in the fight.  We also found some of the original markers for the gang.

The sad thing is we never found AW Grimes marker.  It’s supposed to be in here, but sadly he isn’t remembered in the same way.  I guess it says a little something about our culture that we memorialize and remember a bank robber, but we’ve forgotten all about the Sherriff who gave his life to protect the town.  It made me rather sad to think about it.

Our primary goal accomplished we set out to explore the Slave Cemetery.  The headstones there were much simpler.  Often just a piece of limestone that had been carved into, but was mostly worn away.  Occasionally you found a newer headstone that had been put in place by a more recent person to replace the original.  It was quite interesting to see.

While we were there we also talked about proper behavior for a graveyard, and the different things you will find there.

We talked about walking quietly, and not running.  We talked about why people left flowers or toys on graves.  They didn’t completely understand all of this, but it did help them to process death a little more, and also helped them to understand how some people react.  Some of the gravestones were treated like a shrine to the person with lots of mementos and things to remember.  Others were tended, but left mostly to themselves, and finally some were unkempt with some weeds growing nearby.  We talked about how that person’s family might not be alive anymore to keep it pretty, or maybe they hadn’t gotten along.

We also looked at some of the older mausoleums.  You don’t see many of those in this part of Texas, they’re primarily found in places below sea level, where you couldn’t bury the dead underground because the ground wasn’t stable or was likely to shift (think New Orleans or Galveston).  But, there were a few, and most of them were very old, dating from the foundation of the graveyard, and the kids were fascinated by the state of repair.  I have to admit I found it somewhat interesting.

It’s also interesting to discuss how people died and the dates left on the stones.  We were able to tell some families had died from a disease, as they were all grouped in a short period of time.  Others were young children, those were the saddest.  But, it was a great way to put a reality on some of the things we learned, there were many veterans there, with honors listed on their tombs.