So, I had just emailed Debbie and told her all about how I’m looking forward to getting back to our geography posts, when I realized this post I have planned is all about geography.  It’s the geography of our local area, and this local cave.

About 30 or so years ago they were drilling to make sure the area was strong enough to support an overpass, when they kept hitting air pockets.  Well, lo and behold they discovered there was a cave down there.  So a few years later Inner Space Caverns was born. 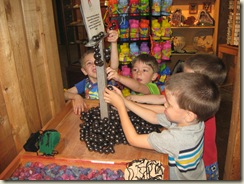 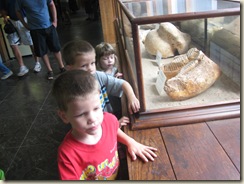 The top of course has the usual museum gift store, designed to lure your kids in to spend money on things they’ll forget about in 5 minutes.  But, the cool part is the second picture.  They had several display cases of fossils they’d found in the caves and what they think they are.  The kids were fascinated to see a mammoth jawbone and dinosaur bones where they could almost touch them. 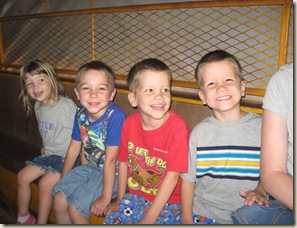 To get down into the cave you take a trolley down, sort of like a super fancy mine car.  The kids of course thought this was super cool.  Our guide was pretty tolerant of having so many pre-schoolers along, I think he thought it was preferable to the tours of elementary kids that everyone else was dragging through. 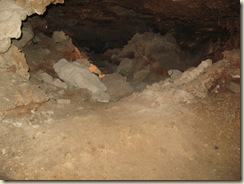 Most of the formations down there are called living rocks.  That means the formations are still being created as the water drips through the porous rocks.  Texas is made up of mostly limestone and similar rocks, so we get all sorts of weird formations.

These are called soda straws.  They’re hollow tubes formed by the interaction between the water and the rocks.  If you broke them off you really could use them for straws.  It’s not recommended because, it’d taste bad.  And, besides it takes 100 years to get an inch of growth on one of those straws. 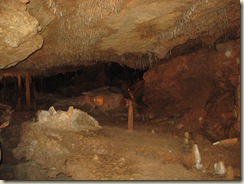 The guides have all sorts of clever stories to tell about the rock formations.  As you’re standing there you really can see the stories they tell, and the things they say.  And you take the pictures, of course later on looking back I can’t remember what story this was.  I think this looks kind of like a dragon, and that glowing light is his eye. 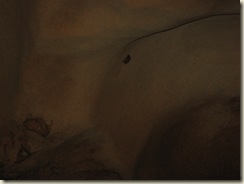 If you look way up there, that little dark spot in the middle of the picture, more or less, is the bat we saw. Of course my brother is playing it up like the bat is going to kill them, and they we see it and it’s maybe two inches across.  Seriously, there’s some times that brothers need to be beaten. 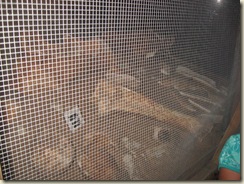 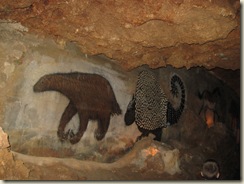 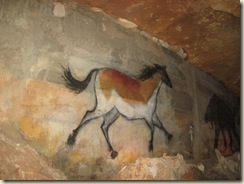 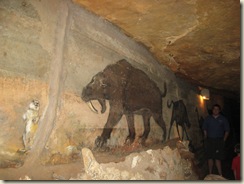 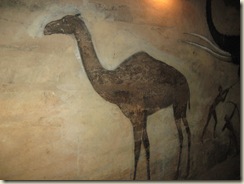 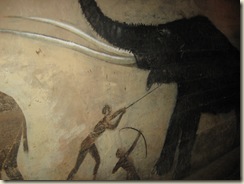 Part of the way through the cave there’s this whole series of pictures of animals.  They had to add in a cement wall to prevent mud from flowing in and collapsing the cave, and they commissioned an artist to recreate as paintings the fossils they’d discovered here.  So you can see, they discovered a horse, a bear, a tiger, a camel, a mammoth, and some kind of anklyosaur (I think).  The last picture was put in to give a perspective of size.  The first picture is more of the fossils they’ve discovered. 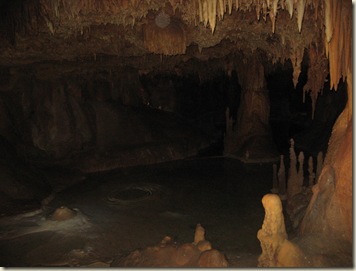 This picture cracked me up.  So, this cave was discovered in 1963 (I may be off by a year), and they called this room the lunar landscape because they thought the moon would look like this.  Of course, we’ve since landed on the moon and discovered it doesn’t look anything like this.  But, I think it’d be much cooler if it did.

I wanted to get more pictures, but my camera was dying, and Chad offered me more batteries, but they didn’t fit my camera for some reason.  So, I gave up on getting kid’s reaction shots, because by the time the picture took they’d left the view screen or I got blurs. 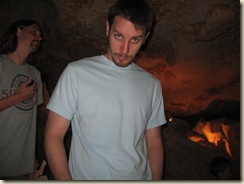 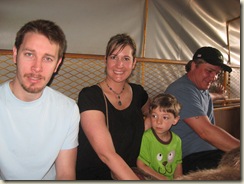 Edited to add these two pictures: Yes Uncle Sean was there, and for once he wasn’t the Uncle scaring/revving up the kids.  See Uncle Chad there in the corner of that second picture.  He kept scaring the kids.  Bad Uncle.  He was also a bad big brother who tried to feed me to a tarantula when I was five.

If the kids had been older this would also have made a great science lesson.  But in reality, this was more of a “caves aren’t scary” lesson.  They were all excited to go in when it was theoretical, but once we were in they spent most of the trip asking when they could leave.  Not so cool.  Oh well, I enjoyed it and laughed at the bad puns and the silly jokes.  The kids were there……..

Head on over to Debbie at Children Grow, Children Explore, Children Learn to see what others have done with geography this week.  I’m thinking I’m going to put continent studies on hold for now because it’s seeming a little much to tackle, but I’ll probably come back to it more later on.  We’re powering on in our state studies with Colorado, because our cousins are from there.