The American Revolution is a hot topic right now. Whether it’s because you’re a fan of Hamilton or because you’re comparing current events to events leading up to the American Revolution. Either way, we’re fascinated by the events and men surrounding that time. We’re in the middle of studying the revolution right now, and towards that end, I’m planning some American revolution movies to watch with my kids as we finish up those history lessons.

Side note, I’ve called this family-friendly American Revolution movies because I’m going to share movies for all age ranges, and while your teenager may not enjoy the movies your preschooler can watch, there is still something to learn from those movies for them.

I’m going to tell you right now, I’m cheating for this category. I’m including a TV show my kids watched obsessively. It’s totally not a movie, but it’s also the best way to teach any kid under 13 the American Revolution in great detail. It’s 8 years later and my kids still remember bits and pieces from this.

Let’s talk making this relevant for your teens: It’s very easy to dismiss these because they’re both rated G. But they discuss hard topics. In the very first episode of Liberty Kids, the pro-revolution kid is forced to confront the downside and terror to someone tarred and feathered just for being in the wrong place at the wrong time. You have both sides represented on the show, the Loyalists and the Rebels, and they’re represented honestly.

Felicity dives into a hard decision, do you conform to societal norms when you think something is wrong? What do you do when your family is split over a political issue? That’s a great discussion no matter how old your child is.

I’m calling this Elementary/Middle School because some families will want to wait for older, and some families will be fine with their kids watching these movies now. I’ll also add one choice is almost a family-friendly movie, but the kids might be bored.

Every family has a different threshold, and some movies I wouldn’t let my middle school student watch, you might be fine with your middle schooler watching. I’ll try to explain any hesitations you might have for the movie. 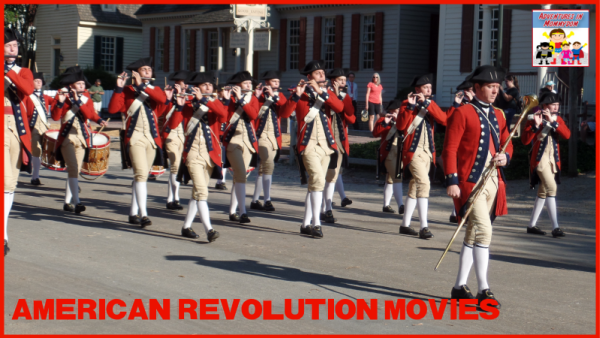 Hamilton- If you don’t know, then you don’t know. Since this is on Disney+ I don’t have a link for it. There are some language issues and strongly implied sex (but not overtly on the scene, it happens, clarifying because some of the later ones it’s a lot more obvious).

John Adams– This is an amazing mini-series from HBO before they got into the all-sex and all-violence all the time trend. There is some nudity, and there is some violence (the tar and feather scene, in the beginning, is very disturbing), but it a great long-term look at the life of John Adams. It takes away the shiny polish on the Founding Fathers. >>>> This mini-series is what got me writing this post. It’s on my plan to watch with them in the next week or so.

The Patriot– This is amazingly bloody, has some sex scenes and is only loosely based in history. They took inspiration from Francis Marion, who is known for his guerilla tactics, and Banestre Tarleton, who was so cruel in his fighting the idea of “Tarleton’s Quarter” is named after him. But, it’s still an interesting movie to watch, as long as you understand it’s not got much in the way of historical accuracy. >>>> I’m pretty sure if I bring this up to Jeff, he’ll happily watch it with the boys, but I’ll let Princess skip it, since she’s not big on movies.

Turn– Jeff and I watched this when it first came on and ended up not finishing it because the series focused so much on the sex life of the characters at the expense of the history of the show. That being said, I’ve heard a lot of praise for the series, and it’s based on a great nonfiction book focusing on Washington’s spies. >>>> That’s a no for me.

There are more American Revolution movies

I’m only including movies (or series) that I’ve got some amount of personal experience with, either because I’ve actually watched it, or I’ve heard it highly recommended by people I trust. I did a quick glance at these American Revolution movies from Wikipedia, but it’s also missing a few movies I know of, but it did remind me of a few movies I’d forgotten to include.

More ways to learn with movies