Teaching the Fall of Man Bible story is difficult. First, there is some controversy in the topic, then comes the difficulty of finding fun crafts and projects to do with the Bible lesson. Do you know what you end up with? Endless variations on apple crafts, because somewhere along the way someone said, “The fruit Adam and Eve ate was an apple.” It wasn’t. We don’t know what fruit it was, so in my Fall of Man Card game, I created an entirely new fruit to not eat.

which in my mind is printed like this Don’t! Eat! That! Fruit!

For this game, I’ve included a black and white and a color version. The game really needs to be printed in color for it to be easy to play, so you can quickly see the difference between the different food items.

Yes, I included things that aren’t fruit in my game.

It’s a little hard to find a few dozen fruits that are easily recognizable by a kid. So, I ended up with lots of vegetables and some grains.

I’m sticking with this plan.

I also invented a brand new fruit. The knowledge of good and evil fruit, or as my kids called it when playing the game, “the sin fruit.”

It’s even colored in an obnoxiously obvious way it’s not a real fruit now.

I somehow doubt God made a polka dot fruit in the Garden of Eden, though.

Set up for  the Fall of Man Card game

So, print the game off and then cut the cards apart. Yep, that’s it

If you’re using the black and white version, color it and then cut it apart.

How to play the Fall of Man Card Game

I put down this game works with 3-6 players. I think 6 players would lead to a very quick game, but you cannot play this with two players.

Have you ever played Old Maid?

Then you know how to play this game.

Basically, pass out all of the cards to the players. Some people won’t have the same number of cards, and that’s fine.

Search through your cards and pull out any matches (as I’m typing up this post, I just thought of another way to play this game, that will have to be the subject of another post).

Once everyone has done that, now it’s time to start. The person to the left of the dealer picks a card from any other player, and if it matches one of their cards, they put the match down on the table. Then the next player picks a card and so on and so forth.

** alternative play, you could let someone go again if they get a match**

The game is over when all the matches have been made and one player is left with the “sin fruit.” That player is the loser.

Yes, this is a luck game

There’s some strategy in not picking cards from someone who only has a few cards, but mostly this is luck, and trying to get people to take the card you really don’t want.

But, it’s fun, and it’s only five minutes to play.

It’s a great game to play as people are entering your Sunday School class, or as they’re being picked up. 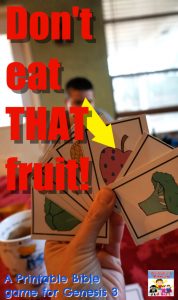 More in Genesis and the Bible