Yesterday I talked about Hoovervilles, well today we’re going to talk about scrounging and living in a day to day life.

Supplies needed: vegetables, sausage or hamburger meat, butter, empty can, place to build a fire or a grill, spices, and space to hide them in 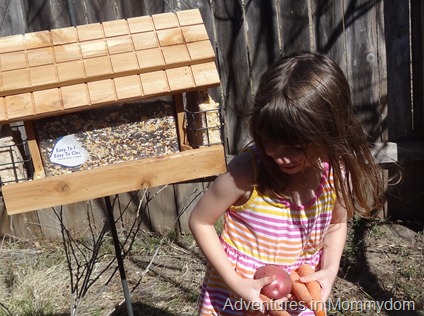 During that period people would scrounge and find whatever they could eat, and then they would cook it in a common pot.  You might contribute a potato, carrots.  Maybe you got a job for that and were able to add in some meat.

To simulate this we had the older kids hide all of the food needed to make our stew outside in the backyard.  Carrots, potatoes, onions, sausage (in its container), spices.  The kids happily ran all over trying to scrounge up what was needed for our food.

At the end of the day, everyone contributed what they’d brought back to the common pot.  Of course some of the less-upstanding members would have stolen their contribution, but we were concentrating on the people who got it honestly.

I wrote more about how to make hobo stew (or trash can soup) earlier, so I won’t repeat all of the details here.

Then they’d all gather around the fire pit and light up a fire.  Our attempt at a fire was rather unimpressive.  Too many “helpers” trying to feed it, and poking and prodding it.

So we cooked it on the grill.  It did make for a more even cooking experience, if much less authentic.

As we were taking this rendition out we got an object lesson in the difference between our cans and the cans in the 30s.  You see that coating that is partially burned off?  That is BPA, you know the stuff we freak out about it being in our water bottles.  Well, it also lines most of the cans we store our food in.

It’s slightly disturbing to see that all burned off and to think of it in the food we had just cooked.  I can’t quite decide on my general thoughts on the whole BPA thing, but I know if you’re doing a project like this take the time to find some cans that don’t have BPA.  We don’t use a lot of canned goods, mainly soups and tomatos, but when we do it tends to be several cans for that meal.

So, I have some thinking to do on the whole matter……….

At some point in the near future I’ll share the movies we watched to get the flavor of the era.  We had to mostly skip the 20s for movies because almost every movie we own is just not appropriate for my kids’ age.  I also know of a few good books to read, which next time around my kids will almost be too old for.

Though, I do eagerly look forward to showing them Oscar.  They’re just a hair young for some of the humor in that movie.

Other posts on this topic:

Depression Era Simulation for Kids (part 1 of this)

Movies to learn about the Great Depression