A few years ago (back when the boys were in preschool) we did a Christmas around the World Unit, and we had a Christmas in Sweden lesson.

Back then we were doing lapbooks and tried all sorts of different recipes.  Since then our learning style has changed slightly and the kids are a lot more grown up.

(All Amazon links are affiliate links) 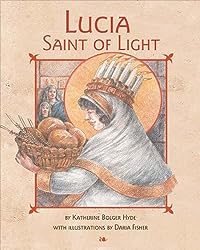 Sweden celebrates Saint Lucia Day as part of their Christmas celebrations.  I found a great book called Lucia: Saint of Light (affiliate link) on Amazon, and ordered it.  It combines explanations of how they celebrate the holiday with the story of Saint Lucia (sanitized for young kids).

Who is Saint Lucia?

I’m glad you asked that.  She was a young lady who gave away her dowry to the poor and was martyred for her faith.  According to legend she would wear a wreath of candles on her head so she could have both hands free to carry food for the poor.  And that leads to the traditions Sweden celebrates today.

First they choose a Saint Lucia bride, she wears a white dress and a red sash.  She wears white because she wanted to be the Bride of Christ, and the red sash is for the red of martyrdom.  The Saint Lucia bride wears all of that and has a wreath of lingonberry leaves and lingonberries (spell check does not recognize lingonberries, silly thing).  She’d be in a parade, and then she would share food on other ladies.

To learn a bit more we made our own Saint Lucia wreath, and some Saint Lucia Cat bread (the other part of the tradition).

First we cut out lots and lots of leaves, I tried to get them to make holly-like leaves, but their leaves ended up more random leaf shapes.

Then use a hole punch to make your berries, as many as you want.

At this point you can either use birthday candles, or make pretend candles from card stock and tissue paper.

Glue your leaves and berries onto the outer rim of a paper plate in a circle format.

Then glue the candles down using a glue dot.

Now proudly wear your Saint Lucia wreath…..  Honest you can wear this.

Then we attempted to make Saint Lucia bread from the recipe in the back of the book.  I say attempted because our dough never rose.  We finally baked the bread, but it was not particularly good.  My mother-in-law who is actually good at baking bread and all things (unlike me)  thinks the yeast might have been old, and it quite likely is because I don’t remember exactly when I bought it.

Seriously, it didn’t turn out well at all.  We ended up sharing most of it with the birds, not that it tasted bad, just it was so very very heavy when you ate it.

Someday a recipe will go right.  Just wait until I share with you our attempts at making a rock cycle recipe….

The other interesting Christmas in Sweden tradition is the Tomten.  In most stories, he’s rather like a Swedish Santa Claus, but there are some that make tomtens an entire group of fairies that are rather like house brownies.

Our library had two books on the Tomten, and they were both quite fun. 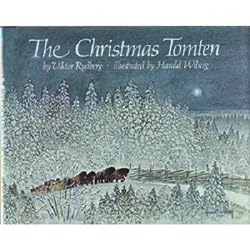 The Christmas Tomten (I’ll warn you, this book looks to be out of print and rather expensive to order) was about the Tomten taking a young boy around as he delivered presents and then the boy getting to see the King under the Mountain.  It taught an interesting lesson, and could be a great jumping off point for discussing gratitude, which the young boy was really struggling with.  I also enjoyed seeing how the Tomten gave wildly different things to different people, that was interesting to me. 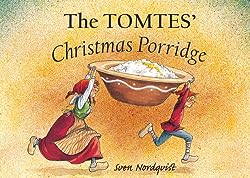 The Tomtes’ Christmas Porridge was our other book (this book is still in print and rather reasonably priced, I would recommend ordering this one), and it treated tomtes as if they were house brownies.  On Christmas Eve in Sweden they leave out a bowl of porridge for  the Tomten to eat.  In this book the family is about to forget to leave out the Christmas porridge, so the Mother Tomte is trying to fix the problem.  It’s a very cute book about how to solve problems, and works in well with the first book we read.

Afterwards we had our own bowl of Christmas porridge just like they do in Sweden.  We even tried out putting jam in our porridge, which got very mixed reviews from everyone as we ate it.  Superman really didn’t like it, but he doesn’t like jam anyways.  Batman thought it was the most awesome way to eat oatmeal and declared he wanted more jam.  Princess liked it okay, but wasn’t sold on the idea.  I was like Princess, it was okay, but by the time I got to eat there just wasn’t any jam left for me to try.

I think we’re gonna add in Saint Lucia Day (December 13) and some of the Christmas in Sweden tradition.  We’ll make it into a fun way to serve others during Christmas.

This post is written as part of a series, I’m lucky enough to join with the Multicultural Bloggers to write about Christmas Around the World.  Come check out some other great posts to see how it is celebrated around the world. Also check out the Ultimate Christmas Planning Post.