Do you ever think about what starts a war?  Some of the wars in history officially started for ridiculous reasons (War of Jenkins Ear comes to mind).  Then there are wars like the American Revolution.  There’s not a single cause, and in many ways, they tried for so long not to start a war.  The first battle of Lexington and Concord wasn’t intended to be a battle by either side and yet it was.  Let’s look at how that happened in this history lesson.

Supplies for Lexington and Concord lesson

these are affiliate links

Step by step in the Battle of Lexington and Concord

The militias had been warned in time, and were ready and waiting for the approaching British soldiers.

The British soldiers approached eagerly.  They were sure the colonists would surrender at the first sign of a soldier, no shots would be fired and their victory was assured.

Meanwhile, the colonists had been joined by a medieval knight, who was armed with a crossbow and was twice as tall as everyone else.

The soldiers kept approaching and the colonists realized this was a moment that would make history, but they were ordered not to fire, maybe it could be talked out if everyone remained calm.

But someone didn’t listen.  No one knows for sure who fired the first shot, but shots were fired and there were casualties on both sides.  The British and Americans left the battle with no clear winner, but obviously at war.

The British troops continued on to Concord, this time the Colonists were aided by a zombie spearman.  He is formidable in battle.

But again everyone’s hopes were dashed as shots were fired yet again. 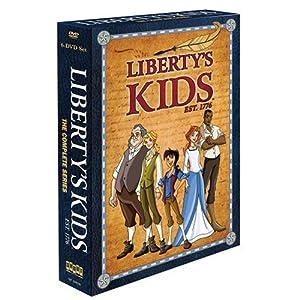 I was really impressed at how well my kids remembered all of this lesson, some of it was from reading it, but most of it was from watching Liberty Kids.  If you haven’t seen the show, it’s currently available on Netflix streaming or you can buy the DVDs (which we have done).  It gives a very accurate and unbiased (there is a main character who represents the British side) view of the whole thing from the Boston Tea Party all the way to the signing of Constitution.

Jeff and I have watched pretty much all of them with the kids and have gotten into arguments about whether it was accurate, and then looked it up and discovered they were right and we were wrong.
So, I’m gonna link up to All Things Beautiful, and Journey to Excellence.