We’ve reached the point in U.S. history where there are a lot of great picture books.  And I’ll share some of the ones we’ve read at the end of this post.

At co-op this week we decided to make it real.  We talked for a long time about what the slaves went through and how hard it was to escape to freedom, and that they didn’t really know where they were going.

The kids were divided into two groups.  We split up my boys because they were going to be the primary ones giving directions (Princess is not good with them, takes after her Mom).  They were given 5 minutes to explain how to get to the park a half mile away.  Once we left the house the kids were just going to rely on the map, no extra directions from my kids.

So what happened once they left?  Well……… 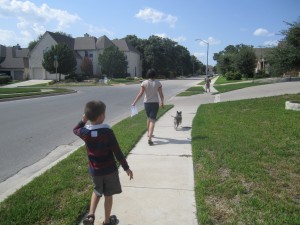 One of the groups got lost.  They wandered for over 15 minutes trying to find their way, and then spied the other group and followed them.

The other group?  They got there more because Batman stopped and refused to go the wrong way.  He didn’t say anything, just stood there not knowing what to do.

What did they learn?

It was hard.  If you went the wrong way then you were lost and either going to be captured or could die because you ran out of food.

It was hard.  They were thirsty and it was a long way to walk.  We only walked half a mile and the kids were hot and worn out from walking in the heat without water bottles (deliberate decision, to let them realize how hard that might be).

It was hard.  It was a long way to walk.  They were walking for hundreds and hundreds of miles.  Our kids only walked half a mile and they were asking “How much farther?”  It’s hard to imagine walking for that long.

It was scary.  Who could they trust?  It’s not like they could stop at the general store and ask the way.  No, they had to pray they were going the right way.

All in all, it was a great lesson.  It really hit home that this was hard.  I don’t think they’d understood it from the books we’d read, so it was a very helpful lesson.

Some other posts on the Underground Railroad: