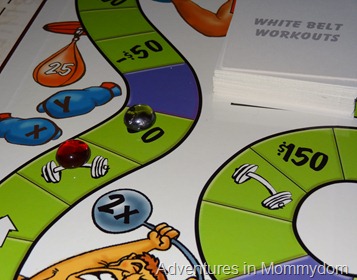 So, I started to write a post about going to a homeschool convention, but realized I didn’t have anything super helpful to say, and it was mainly going to be lots of hints of things to come.  I didn’t want to write that.

So (seriously I use that too much), Instead, I’ll just jump write in. 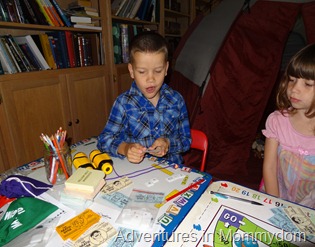 Here’s the premise, you’re going around the board in either direction to whatever square you want.  You get there by building equations from the tiles you have.  Your numbers can be positive, negative, or exponents (we took out the exponents), and you get operation tiles as well.

I spent a good hour or so talking to the guy there because I didn’t believe him that my 5 year old could play this.  He convinced me, and I bought it.

She’s not a huge fan, but she doesn’t like games in general.  The boys who are fans.  LOVE it!

Your goal is to earn money by either landing on squares that give you money or by landing on a workout square where you do math problems (more on that in a second).  Princess worked her way around the board going in a negative direction almost the entire time.  The boys went positive, negative, all over. 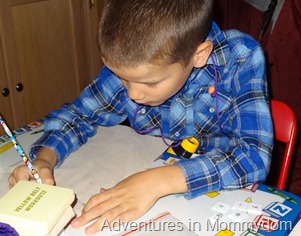 When you land on a workout square you grab a card based on your ability.  My kids are all white belts.  That’s first/second grade math.  It goes all the way up through early high school with Algebra 1 and 2.

Our first game took about an hour to play, but this was also my kids first exposure to negative numbers, and they grasped the concept fairly quickly and were making up math problems like aces.

It’s on sale right now for $50 (yes that is a lot, but I think it’s totally worth it).  Considering most of the strategy games we buy cost about the same, and I’m seeing years worth of math practice in this game.  It’s worth it to me.

I LOVE this game (and I’ll have a post up about some of the other games I bought later).  I wanted to talk about this one first because I’m going to have a giveaway coming up soon for their computer game.
Go, look at it, try the online version of it (there’s an online version of the board game), and then discover how cool it is.

PS: I was not paid for this, I did not get a free copy, I bought it and loved it, so that tells you how much I like it.