My kids amuse me at times.  Their grandparents came into town and they were telling the grandparents all about what they’d learned in school.  I eagerly waited for them to tell all about the cell, and how we made an edible cell model.

Is that what they talked about?

Instead they talked about the Egyptians, and how they mummified the dead bodies to prevent decay, and that God taught the Hebrews to wash their hands so they wouldn’t get germs.  They talked all about how the ancient Greeks created theories, but never tested them, so their theories were bad.

So much for my fantastic hands on lesson sticking in their heads.  But, maybe this edible cell model will stick in your kids heads. 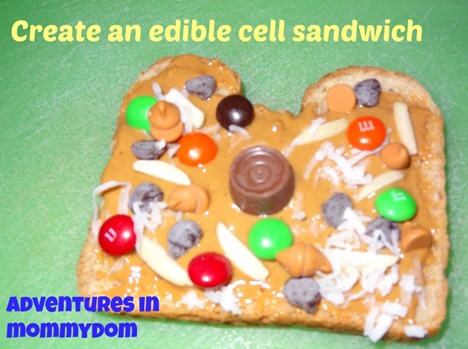 slice of bread, peanut butter, chocolate chips, almost slivers, M&Ms, butterscotch chips, coconut {Yes, this project is not good for those with peanut allergies, but you can substitute another spread and other items for the allergen causing items, these are just favorites of my kids}

How to make an edible cell model

First generously cover your slice of bread with peanut butter, this will be the cytoplasm the organelles float in.

Then add some almond slivers for mitochondria.  Maybe take a few extra to eat because you’re hungry.

Then add some shaved coconut for golgi bodies, those are like the grocery stores.  Some chocolate chips for lysosomes.  The kids were really looking forward to eating these at this point.

Then completely forget about taking pictures step by step and get busy adding stuff because you’re hungry.

So add some butterscotch chips as endoplasmic reticulum (ER), the delivery men of the cell.  M&Ms for centrioles, the “mommies” of the cell.  Finally add a Rolo for the nucleus, the government body of the cell.

Of course at the very end you eat your cell, with much hungry ravenous noises.  We opted to do so while watching The Magic School Bus

{affiliate link} on Netflix, where I was very disappointed to discover the episode about cells is not on instant cue, and I might have to break down and buy the series.  Instead we watched the episode about somebody being sick (can’t remember the character’s name).

Afterwards we did one last review by drawing a cell diagram.  Which led to the kids fully visualizing the cell descriptions, the boys drawing soldiers for the lysosomes, and delivery trucks for the ER.  It really cracked me up to see them alter on.  When they were describing everything in the cell to Jeff they could tell him the jobs of the different parts, but couldn’t remember the name.  So I see that as a future review opportunity.

Let’s see what others did this week:

Each week I’m spotlighting a few posts that were shared previously.  Many posts get linked up later in the week and they don’t always get as many clicks as they deserve, so I’m trying to spotlight a few every week.

I learned from this post that there is airborne yeast in the air, and you can use it to make a starter for sourdough bread.  Thanks to Angellicscalliwags for sharing it.

Highhill Homeschool shared a density of solids experiment that I’m going to use this year when we reach Archimedes.

I am in love with this astronomy and space flight activity from All Things Beautiful.

Now link up your SCIENCE posts for the week, and then visit some of the other posts linked up and say hi. I’m going to be pinning, commenting, FBing or tweeting all of the posts linked up as the week goes by.  {I got behind commenting last week, between starting school, and cleaning for visiting family, I haven’t promoted your posts yet, that’s on my to do list today.}