Here we go, my library had a lot of books, I’ve got most of the ones we read recorded here, and pretty much only included the ones they actually enjoyed.  Lon Po Po is the only one they were lukewarm on, but I wanted to make sure to include the Chinese Red Riding Hood because it amuses me to see “our fairy tales” in different cultures.

And here’s the nonfiction books, I just noticed that half of these are about pandas.  That’s really kind of funny.  Here ya go::

All right, now I have everything saved, so I can safely return these to the library and not get anymore fines……  Not that I was getting fines, oh wait I was getting a lot of fines, or was about to.

I had been wanting to wait and put this up until we were all done with the lapbook, but since I”m putting continents on indefinite hold, I might as well let you know the great books we found, and the activities we did.  Who knows, it may spark an idea for someone else. 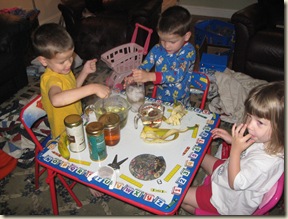 We learned how tea is made, and figured out it is best made in hot water. 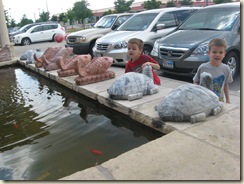 We went to the Asian market and learned about making noodles. 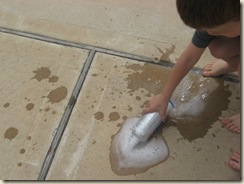 And, I almost forgot (because it’s not tagged Asia).  We learned about making explosives in honor of China inventing gun powder.  And, I learned not to approach the homemade rocket for a long time after it’s supposed to of exploded.  Ouch…….. 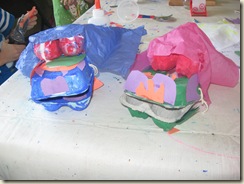 And, I apparently still need to write a post about this, so I’ll do that later today, hopefully.  Or maybe not because I’m supposed to be helping pack a friend’s house.

Other ideas that we didn’t do, or they didn’t work out:  making paper, making a kite (I had found an excellent tutorial, but it just so did not work for us).  Maybe later when I’m not feeling vaguely sick I’ll look up all the links I had found to share with you.

Now, head on over to Jule this week at Just Playin’ Around to see other geography and history posts.

There, I finally got this out of my drafts to be finished……..